Can you tell your jewels from your garnets? A guide to common supermarket sweet potato varieties to know and love.

There are very few foods I can’t live without. I grew up with vegetarian parents, so I can comfortably go decent stretches of time without meat. I’ve shed sugar from my diet for months, and taken long (okay, long-ish) breaks from drinking. But if you told me right now that I could never eat another sweet potato, I don’t know how I’d go on living. It is, after all, my favorite fall vegetable.

I've long believed that the sweet potato is a perfect food—it's filling, flavorful, easy to make, and, according to the internet, relatively nutritious. Though our site boasts some truly excellent sweet potato recipes, I’ve always preferred them completely plain. I roast them in a scorching-hot oven—though science (and our culinary team) advises against this—until the skin turns to a crinkly leather and the interior is a gooey, steaming mess of bubbling sugars and chewy flesh. There have been entire years during which I've religiously baked two sweet potatoes every night, eating one piping-hot from the oven, and putting the other in the fridge overnight. I eat them cold for breakfast the next morning, by which time they've developed a wonderful custard-like texture.

Over the course of my years of near-religious sweet potato consumption, I've bought pretty much every shape and shade of sweet potato on grocery store shelves. I quickly learned that there isn’t a universal cooking method that suits all varieties—there are thousands of sweet potato varietals out there, and knowing what you’re in for in terms of taste and texture for a few of the most common varieties will help set you on the path to sweet, sweet bliss. While some sweet potatoes are dense, starchy, and creamy, others are more watery when cooked, with a stringier texture. Some you’ll want to mash with butter and herbs, while others are better left in chunks, roasted with hearty root vegetables.

What Is a Sweet Potato?

For starters, a sweet potato isn't a potato at all, meaning it's not a member of the Solanum tuberosum potato family from which French fries, mashed potatoes, and latkes are made; their composition of simple sugars and complex starches are quite different. So in case you've ever been tempted, take care not to substitute a sweet potato for an Idaho willy nilly; in some cases it may work (you can mash cooked sweet potatoes easily), in others it won't (good luck frying them to the same crispy crunch).

Sweet potatoes actually belong to the morning glory family, Convolvulaceae (that means lots of pretty flowers!).The most common varieties in the U.S. are the Beauregard (the most widely grown cultivar), the jewel, and the garnet (also sometimes known as red yams). But while most Americans are comfortable with the two or three shades of sweet potato they’re familiar with, they might avoid some of the tastiest varieties for lack of familiarity.

Let this not-at-all-exhaustive guide act as a doorway into the vast and incredible world of Ipomoea batatas (that's science for "sweet potatoes").

What's the Difference Between Sweet Potatoes and Yams?

Though many grocers use the terms "yam" and "sweet potato" interchangeably, the two are far from the same. Unless you live in a tropical climate, or are cooking dishes that specifically call for them, you probably aren't encountering yams at all. Real yams are native to Asia and Africa, and have scaly brown skin surrounding very starchy white flesh. They’re not nearly as sweet as sweet potatoes and take best to boiling and slow braising.

On the bright side, this means you're highly unlikely to accidentally purchase a yam at your local supermarket. Instead, you'll find plenty of sweet potato varieties mislabeled as yams. That's thanks to early 20th-century Southern farmers, who began using "yam" to refer to the newer, orange-fleshed varieties of sweet potatoes they were cultivating, as a way to differentiate their product from the white-fleshed sweet potatoes Americans were already familiar with.

It's not always easy to tell varieties of orange sweet potatoes apart. So to get a little more clarity about the differences between some of the most common orange tubers, I checked in with Keia Mastrianni, a North Carolina–based writer and oral historian. Keia is the Deputy Editor of Crop Stories, a food magazine telling the stories of farming in the agricultural South. The magazine published an issue exclusively dedicated to sweet potatoes.

Keia explained that all three of the popular orange varieties I'd decided to include in this guide were designed first and foremost with production in mind. “They are your grocery store potatoes,” she says. “Flavor was not the primary goal for the production of these varieties.” That doesn’t mean that Beauregard, jewel, and garnet sweet potatoes don’t serve their purpose in all sorts of recipes, but compared to some other varieties, their flavors and textures are mild.

This is the most common sweet potato variety in American grocery stores, and the one you'll find at pretty much every market. If you see a bin simply labeled "sweet potatoes" it's likely you're either buying Beauregards or jewels (we'll get to those in a moment). Beauregards have purplish-red skin and a deep orange interior. Their flesh is slightly stringier and more juicy than some other varieties when cooked, so they're good for mashing and incorporating into baked goods and desserts.

Try using this variety in our recipes for candied yams (or, more accurately, candied sweet potatoes), miso-scallion roasted sweet potatoes, and sweet potato biscuits. Beauregards will break down slightly when cooked, and when roasted, while they'll still hold their shape, they don't maintain the same chewy bite that other varieties do. These sweet potatoes don't boast the most complex flavor, but they make up for it with plenty of sweetness.

If you see a bin simply labeled "sweet potatoes" it's likely you're either buying Beauregards or jewels.

Jewels have light orange skin, and are less intensely sweet than Beauregards, but can be used in many of the same recipes. These orange-fleshed sweet potatoes pack a lot of moisture, and take well to boiling, baking, and making into casseroles. Though they can get watery, jewels and Beauregards are both excellent all-purpose sweet potatoes.

You can recognize a garnet sweet potato thanks to its dark orange-red skin, which conceals bright orange flesh. They're even more moist than jewels or Beauregards, which makes them great for baking projects; they're our ideal sweet potato for pie, mashed sweet potato casserole, and nice and simple mashed sweet potatoes. In addition to being sweet and flavorful, they retain their lovely orange hue even after baking.

If you spend any time in Hawaii, you'll find these sweet potatoes incorporated into some of the most delicious potato salads around, dressed generously with my favorite condiment: mayonnaise. Okinawa sweet potatoes, also known by their Japanese name, beni-imo, have unremarkable off-white or dusty purple skins, but once you slice into them, you're greeted by a rich and vibrant purple flesh rarely seen in nature. Like the Hannah, Okinawa sweet potatoes are denser than orange varieties. While swapping these into recipes that call for orange sweet potatoes is a fun way to add a burst of color, their mild flavor and dense texture makes a one-for-one substitution tricky. I love to simply roast then mash these sweet potatoes with butter, but they can also be used to add some heartiness to winter stews and braises.

The Japanese satsuma-imo is my absolute favorite sweet potato. It features beautiful dark-purple skin and pale yellow flesh than darkens as it cooks. These sweet potatoes are much denser than most of the orange varieties, and starchier, too. Though I think of these as very sweet, their flavor is actually more subdued and subtle than other breeds. They have a slight nuttiness, and take well to steaming or roasting in cubes alongside other root vegetables. Because of their denseness, these sweet potatoes take longer than some other varieties to cook, but the wait is well worth it. When finished, they'll be creamy, smooth, and rich. Unlike orange sweet potatoes, you don't have to worry about satsuma-imo getting soggy or waterlogged as they cook. 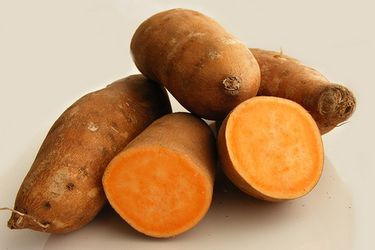 In Season: Sweet Potatoes, For Breakfast, Lunch, Dinner, or Dessert