Roux, a mixture of fat and flour cooked together, thickens classic sauces such as béchamel and velouté, as well as hearty gumbos and étouffées.

You can rue the day, you can rue every single life decision you've ever made, but please, don't rue your roux. Making this simple starch-and-fat mixture shouldn't lead to frustration and regret, especially if you understand the key details that go into preparing a good one and using it right. So, let's get going.

What Is a Roux?

A roux, from the French word for "red," is a mixture of roughly equal volumes of a starch and a liquid fat that are cooked together and then used as a thickener for liquids in soups, stews, and sauces. It's a common technique in Continental cuisine (French, Italian, et cetera), and is also used heavily in the Cajun and Creole cooking of Louisiana for thickening dishes like gumbo and étouffée.

A roux works thanks to the thickening power of starch. Starch is made up of minuscule granules, each of which contains two different forms of starch molecules. First are the long, thin chains of glucose known as amylose; the second are branched clusters of glucose known as amylopectin. When starch is combined with water and heated, the granules swell and burst, and those molecules spread throughout the water, bumping into each other and slowing the movement of all the molecules in the solution.

This slowing of movement is what we perceive as thickening and viscosity. The starch molecules that are most effective at doing this are the long amylose chains, which, much as with a logjam in a river, bump into each other at every turn, and make a rapid free-flow impossible.

Clearly, we need starch for thickening, but why make a roux at all? Two reasons. First, a roux is useful for cooking the raw flavor out of the starch, which leads to better flavor and aroma in the final dish. And second, when you combine the starch with a fat, each starch granule becomes coated in the fat. By keeping the flour granules apart, the fat helps them disperse more evenly when combined with a liquid, like stock or milk, later.

Anyone who's ever tried to thicken a gravy by adding just a tiny bit more plain, dry flour knows that the dry starch rapidly forms stubborn clumps: little bubbles of flour, coated in a surface layer of impenetrable wet paste. You can spend hours chasing them around the pot, trying to smash them apart. A roux prevents this from ever happening.

The starch in a roux is typically flour, while the fat can be anything from oil to lard to melted butter, depending on the flavor you want. The two are whisked together to form a paste, then cooked to varying degrees of doneness. Exactly how much the roux is cooked depends on the flavor and color you want.

The least-cooked roux should be on the heat just long enough to remove the flour's raw-grain flavor and aroma, but not long enough to allow it to brown at all. This produces what I'm calling a "white roux" (different cooks use different terms for this, so you may see others refer to it in another way), which is the roux traditionally used to thicken milk for a classic béchamel sauce.

If the flour is allowed to cook longer, it begins to toast, just like a piece of bread, with similar flavors and aromas developing the darker it gets. The process driving this darkening of the flour and development of flavor is none other than the Maillard reaction, the complex reactions of proteins and sugars that give roasted meats and vegetables their roasty flavor, and toasted grains and flours their...um, toasty flavor.

How dark a roux is cooked has a drastic impact on the final dish. Not only do roux of different degrees of browning deliver different flavor profiles and colors, but they also thicken the dish to a greater or lesser degree.

The Difference Between Light and Dark Roux

When I worked on my article and recipe for béchamel sauce, I found that for a really thick version, one stiff enough to hold moussaka or soufflé together, you needed about three tablespoons of flour (mixed with a roughly equal amount of fat, which, in béchamel's case, is butter) per cup of milk. For a more sauce- or gravy-like consistency, one to two tablespoons of flour per cup of milk did the trick.

But this is only true if you're using a white roux, one that has had the raw-flour flavor cooked out of it but still hasn't developed any color. If you were to cook the roux longer, allowing it to darken—as one often does for dishes like gumbo and étouffée, or even a Japanese kare—you would need increasing amounts of roux to maintain the same degree of thickening.

To show you what I mean, I cooked four samples of roux to four different stages of doneness: white, blond, peanut butter, and dark brown. Each roux contained the exact same amount of flour and oil. When each was done, I whisked it into the same amount of water, then brought each to a simmer, cooking it for a few minutes to unleash the flour's thickening properties.

As you can see in the photos, the darker the roux gets, the less well it thickens the "sauce" (if a mixture of water with flour and oil can be called a sauce). In the case of the white roux, when I dragged a spoon through the sauce, it left behind a trail that didn't close up, a sign of the sauce's considerable viscosity. But the darker the roux got, the thinner, and therefore runnier, the sauce became. By the time I got to the dark-brown roux, the spoon's trail closed up right away, every time.

The reason this happens is that the longer the flour cooks in the fat, the more its long chains of starch molecules—which are essential to its thickening power—break down into shorter segments. The shorter they are, the less effective they are as thickeners. A dark-brown roux has far fewer long-chain starches left in it than it did when it was several shades lighter.

The lesson: If you want to use a dark roux, you're going to need a lot more of it to thicken the same amount of liquid to the same degree that a lighter roux would.

Should I Use Butter, Lard, or Oil in a Roux?

The fat you use in a roux has a direct effect on the roux's flavor. Butter adds rich dairy notes, while lard offers a subtly funky animal richness. A neutral vegetable oil is just that: neutral. There's no right or wrong to which fat you use; it just depends on what flavor you want. In a dairy-heavy sauce, like milky béchamel, butter is the common choice (and is also the more common fat in most French roux), while oil is often preferred in Creole and Cajun cooking.

Butter, though, is more than just a fat. It's an emulsion of mostly milk fat with some water and milk solids (mostly proteins and sugars) suspended in it. As butter cooks, the water evaporates, and eventually the milk solids begin to brown. This is how a brown butter is made.

The risk with those milk solids is that they can eventually scorch and burn, which isn't a problem with a lighter roux, but it can become one if you're not careful when cooking a roux to the darker stages. This is why Creole and Cajun cooks often reach for oil instead of butter: Their darker roux are less likely to turn acrid from burnt milk proteins. (I happen to like the flavor and aroma of a butter-based roux so much that I often risk it even with darker roux, but then again, I like to live dangerously.)

How to Cook a Roux: Oven or Stovetop?

A roux can be prepared on the stovetop or in the oven. There are advantages and disadvantages to each.

A stovetop roux cooks faster, and, since you're whisking more or less constantly as it develops, you have an eye on it the whole time. This allows you to gauge its color and aroma more precisely, and pull it off the heat when it seems right. The faster cooking time can be a huge advantage, but it can also be a risk: A stovetop roux can scorch more easily if you're not careful.

An oven roux, on the other hand, takes time. It took about an hour and a half at 350°F (180°C) for my test roux to reach the blond stage (a light tan color, just past white); it took another three hours after that for the final, dark-brown roux to be ready. That's a lot of waiting, and a dinner that's guaranteed not to be on the table until after midnight unless you've planned well ahead. On the flip side, it's mostly unattended time, in which you can go file your nails or get lost in the never-ending stream of breaking political news on Twitter, without having to worry much about your roux suddenly going up in smoke. Plus, if you do it in a piece of cast iron, you're seasoning the pan at the same time.

The oven method takes longer than I'm usually willing to wait, but I'm the impatient type who loves to stand over a pot, nose-deep in it, inhaling all the good stuff going on below. Not everyone is like me. Think through the kind of roux you want, and how you'd like to get there. As long as you understand the underlying principles, you'll never rue your roux again. 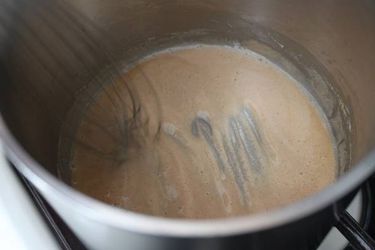 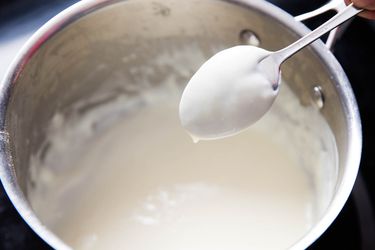