The oddness of bagna càuda strikes on two levels. First, the idea of it is just plain weird—a salty and pungent dip, loaded with obscene amounts of garlic and anchovy. It's difficult to imagine who first thought to cook heaps of those two potent ingredients together into a brown and oily sludge, but that person should have a holiday named after them, because, as unlikely and off-putting as the initial idea seems, the result is undeniably delicious.

The second is the strangeness of where it's from. Bagna càuda comes from Piedmont in northwestern Italy, a landlocked region ringed by the Alps and famous for its mountain cheeses, buttery hazelnuts, and funky white truffles. You wouldn't expect anchovies to be one of the region's signature ingredients, given that there's no ocean in sight, and yet they are. They star in bagna càuda, punch up the flavor in the Piedmontese version of salsa verde, and enhance the fishiness of the tuna in its namesake tonnato sauce, all local specialties.

So how did these salty little fish become so central to Piedmontese cooking? Theories abound, but the most likely one has to do with salt itself. Once a valuable commodity, salt was heavily taxed along its trade routes. To skirt those taxes, some merchants began packing their salt under layers of salted anchovies—if a government agent cracked open the barrel, they'd see the anchovies and wave them through without demanding the salt tax.

This activity brought salted anchovies to Piedmont, where they became a kitchen staple. Eventually this led to a whole new, more legitimate salted-anchovy industry there. Each year after the summer harvests were finished, poor farmers from Piedmont's Maira Valley would trek to the Ligurian coast to load up carts with salt-packed anchovies. Then they'd return, trundling to every town and village in Piedmont all winter long, selling their crates of preserved fish. The practice was widespread until World War II, when motor vehicles put most of those roving acciugai—anchovy merchants—out of business.

Even though you're unlikely to see an anchovy cart on a road in Piedmont today, the region's cuisine was forever changed, and anchovies now have a permanent, and critically important, place at the table. If any dish should represent this peculiar history, it's bagna càuda.

Bagna càuda expands dramatically on an anchovy's ability to melt into a sauce. Instead of melting just a few anchovy fillets into the base of a sauce to subtly enhance its flavor, bagna càuda makes this the sauce's defining feature. Most recipes want the anchovies to dissolve and then disappear, leaving behind a whisper of savoriness. Bagna càuda wants those whispers to pile up on themselves until they become a sustained and booming chorus. The effect is no longer some kind of vague "savoriness," but the full and brash intensity of fishy, salty anchovies.

Anchovies alone would be inedibly salty, though, so they have to be cut with something, and bagna càuda goes on the offense here, too. It blends one of the sea's most assertive flavors with one of the most pungent of the earth—garlic, and lots of it. They cook down together in olive oil until they form a thick mash whose components can't be teased apart, by sight or taste.

Bagna càuda has only three critical ingredients: the anchovies, the garlic, and the olive oil. Sometimes a few other things, like butter or milk, find their way in, though those inclusions always set off a typically Italian debate about whether they're correct or not.

None of my blind-tasters could tell a difference between batches with and without the germ, a sign that it's not as important as some people claim. Though I should add that my garlic didn't have a very developed, green germ, so I can't rule out that, in those cases, there may be some benefit to pulling it out. Still, I wouldn't worry about it too much.

The garlic that cooked in oil from the start, without a milk- or water-poaching step, was the hardest to smash into a mush later. This isn't shocking. Even if you take lots of care to keep the oil's temperature low, it doesn't take much for the heat to climb just a little too high, gently frying the garlic and hardening it in the process.

For this reason, we all liked the batches in which that garlic was poached first, whether in milk or water. The garlic grew increasingly soft and tender, making it easy to smash into a purée in the oil later. Between the water and the milk, tasters tended to prefer the milk-poached version for its slightly richer and more complex flavor, but the difference was hardly revelatory. Water works just fine, if that's what you've got.

Once the garlic is soft and in the oil, the anchovies go in until they melt down. The quality of your anchovies matters here—they're not hiding behind anything. Look for good imported oil-packed anchovy fillets, like Agostino Recca, or buy a tin of salt-packed anchovies and prepare them yourself following my instructions here.

At this point, you can use a wooden spoon to smash any larger lumps of garlic or anchovy that remain, until you have a relatively smooth purée. For an even smoother sauce, a quick blitz with an immersion blender will do the trick.

The dip is meant to be eaten warm (the name means "hot bath" in the dialect of Piedmont), and you'll often see it served in a special warming dish, with a candle below to maintain its heat. If you want to fill up your cabinet space with one of these, you can find them online. My wife will kill me if I add one more piece of super-specialized equipment to our kitchen, so I do without, instead making sure the bagna càuda is nice and hot before bringing it to the table.

Just as important as the bagna càuda itself are the vegetables it's served with. As I think I've made clear, bagna càuda is potent, and one of the best ways to work with that is to pair it with other foods that have strong complementary flavors—especially ones that are bitter or sweet.

One of the most classic vegetables for bagna càuda is the cardoon, which is a thistle with edible stalks. It's closely related to the artichoke (in fact, the bitter taste you may have noticed on your hands after preparing raw artichokes is very similar to the cardoon's flavor), and it looks an awful lot like a head of celery. Cardoons have long fibrous threads that run lengthwise along each stalk; these can be pulled clean and discarded.

Onions are also delicious on the vegetable platter. Not raw ones, though, which would be too much for even the most intrepid bagna càuda eater. Instead, roast the onions whole, directly in their skins. Once they've softened, simply peel off the outer layers and cut them into dippable pieces.

Bitter, leafy chicories, like radicchio and endive, are crunchy and refreshing; raw bell peppers add more sweet options, while radishes have a peppery bite. More important than anything else is to go for a variety of vegetable dippers in a range of colors, textures, and flavors.

All together, the effect isn't strange at all. It's wonderful, and delicious—and, yes, unrestrained. But we need a little of that in our lives. 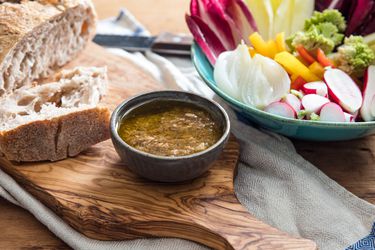 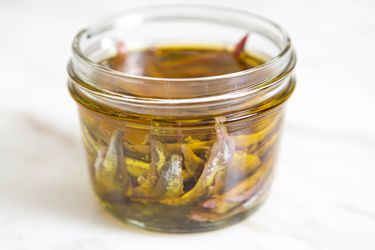 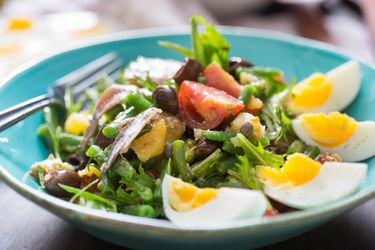