3500 Cedar Avenue South, Minneapolis MN 55407 (map); 612-722-7072; mattsbar.com
Cooking Method: Griddled
Short Order: Jucy Lucy (misspelling is intentional) is a testament to how good the idea behind this concoction is, but the cheese could be better; double cheeseburger is craveworthy
Want Fries With That? Yes you do. The fries are pre-frozen and don't particularly taste of potatoes, but the skinny vessels of well-salted fat are surprisingly crave-worthy
Price: Jucy Lucy and double cheeseburgers, $5.50; full order of fries, $4.50; half order, $3.75.
Notes: Cash only

The Juicy Lucy, for those unaware, is a cheeseburger with a twist. Decades ago, a Minnesotan, presumably suffering from cabin fever in the fifth month of winter, came up with the idea of putting cheese inside the burger rather than on top. The result is a burger with a gooey mess of molten cheese inside that can, if you're not careful, burn your face off when you take your first bite.

For reasons that are unclear, the Juicy Lucy has not made many inroads into the burger scene outside of the Twin Cities. But in its native environment, Ms. Lucy inspires fierce partisan battles among fans of different purveyors, especially the two oldest and most-recognized, Matt's Bar and 5-8 Club, which are located a mere three miles apart on Cedar Avenue in South Minneapolis. You should hear the arguments; they go something like this:

Updated author's note: This conversation is fake; in four years of living in Minnesota for college and more than a couple of dozen visits since, the author has never encountered someone who speaks with anything close to this extreme of an accent.

You might not realize it, but those two guys were this close to a major brawl. Fortunately for the future of burger relations and public safety in Minnesota, I am prepared to settle the fight once and for all. My findings may surprise you.

I walked into the 5-8 Club at about 4:30 p.m. on a Saturday and the place was packed. Despite the early hour, the crowd made sense. What was totally out of place was the décor, which had the feel of an Applebee's or Chili's thanks to the reproduced old ads and movie posters all over the wall along with various neon signs. I understood that 5-8 Club has evolved into a three-location mini-chain, but this was the original location and the place was born as a speakeasy in 1928, so I was expecting something a lot less manufactured. Not one to let poor interior design decisions impact me, I excitedly sat down to try my first Juicy Lucy.

The Juicy Lucy at 5-8 Club contains a half-pound of ground beef and is stuffed with a choice of American, Amablu Blue, Pepper, or Swiss cheese. American is the traditional choice and I wasn't about to ignore history at a place that's been serving these things since the 1950s.

I got my burger cooked medium well, which is the default temperature. For a burger that spent so much time on the griddle, the crust was surprisingly soft. Grilled onions were optional and were on the sweet side, so much so that I had to take most of them off. The soft bun is pretty standard, but does come toasted on request, which was nice. The beef itself was bland, offering little in the way of beefiness and nothing resembling seasoning. It was, however, surprisingly moist for a well done burger.

Fortunately for 5-8 Club diners, cheese can turn an ordinary burger into something delicious and a stream of melted American cheese can do a whole lot more than that. Individually, a lot of the elements of this burger were far from ideal, but the bites where everything came together around intoxicating cheese product were excellent. Unfortunately, a number of bites around the edges didn't come with any cheese, and because this was half a pound of relatively bland beef, those cheese-less bites were not so good. The solution here is obvious: order a Juicy Lucy with an additional slice of cheese on top.

While the actual birth date (and actual restaurant birthplace) of the Juicy Lucy remains in dispute, 5-8 Club's menu definitively declares that the Saucy Sally, "Lucy's younger sister," came to be on May 8, 2005. This burger is a cross between a Juicy Lucy and a Big Mac. It's a half-pound of meat, filled with a secret sauce and covered with American cheese and a medley of lettuce, raw onions, and Thousand Island Dressing.

The Secret Sauce was completely indistinguishable from the Thousand Island dressing on top, which was fine because that dressing works so well on burgers. The beef was identical to that in the Juicy Lucy, but the chewier bun was a welcome change given the added moisture from the dressing and veggies. I can't say I'll ever eat a Saucy Sally again, but this messy beast of a burger was fun to try once.

The steak fries (called jojos) and the onion rings were just bad. They were both pre-frozen and devoid of flavors resembling potatoes or onion. Thinking about them actually makes me angry so let's just move on up the road to the competition.

I was warned what to expect when I walked into Matt's Bar, but I was still shocked to notice the stench of urine filling my nostrils when I walked into the place around 11 a.m. in the morning the day after my visit to 5-8 Club. It's a testament to human evolution that after about 30 seconds, I adjusted and no longer thought I was sitting next to a urinal. Even without the smell, Matt's screams dive bar; the place is dark, the furniture is as basic as it gets, and it appears nothing has changed in decades.

Matt's traces its Juicy Lucy back to 1954 and the current owners are emphatic that this is the place the burger style was invented. It's also worth noting that Matt's spells Juicy as Jucy, supposedly because when the original sign arrived, the misspelling was there and the owner decided to go with it.

There is no kitchen to speak of at Matt's; the burgers are cooked on a small griddle behind the bar that appears to be about two feet by four feet. With limited room for burgers, the waits for food can be long, though it wasn't an issue on my visit. The menu choices are extremely limited, which for the Jucy Lucy means there's only one cheese option: American.

"this was some really flavorful beef."

The burgers are delivered to tables wrapped in wax paper and plates are nowhere to be found. They are substantially smaller than the ones at 5-8 Club and come with a beautiful crust. I'm not sure if salt is added by hand to the meat or if the beef just benefits from a griddle seasoned by decades of overuse, but this was some really flavorful beef.

The meat is cooked to medium well but is still surprisingly juicy. The bun was typical grocery store quality, which is a natural fit for the burger and the atmosphere. The only problem with the Jucy Lucy at Matt's was, shockingly, the cheese. In both texture and taste, it came across as watered down American cheese. The total package was still delicious, but this is a dumbfounding flaw.

Still, even with that shortcoming, the Jucy Lucy from Matt's beats the Juicy Lucy from 5-8 Club by a wide margin. The molten cheese might be key to the style of burger, but the beefiness of the meat and the skill with which it's cooked has to be the deciding factor. That said, and here's the surprising conclusion, the Jucy Lucy at Matt's was not the best burger I had in Minneapolis.

The double cheeseburger at Matt's is a spectacular treat that I can't wait to savor again. It has all of the good qualities of the beef in Matt's Jucy Lucy, but each patty is topped with a slice of American cheese. The top slice was warm and soft while the slice in between the patties was about as melted as cheese can get. Diced fried onions are available and I got some after taking pictures. The tiny bits of crisp onion added some nice texture as well as light toasted onion flavor.

I wasn't expecting much at all when the basket of fries arrived at the table. The pre-frozen potatoes looked undercooked; I was expecting limp packets of grease. While they were greasy, when that grease is delivered by surprisingly crispy spuds that are doused in salt, all seems right in the world.

"Matt's is the clear winner."

Frankly, after visiting 5-8 Club and Matt's less than 24 hours apart, I don't understand how there's even a question about Juicy Lucy supremacy. When it comes to quality of the patty, execution in the kitchen, the fries, and, once you get over the scent of urine, the ambience, Matt's is the clear winner. Judging by others who have done the comparison around the interwebs and on television, I'm hardly alone in that opinion. But the real shocker for me was that as good as Matt's Jucy Lucy is, the basic double cheeseburger is loads better. And perhaps that goes a long way in explaining why the Juicy Lucy craze has not swept the nation. 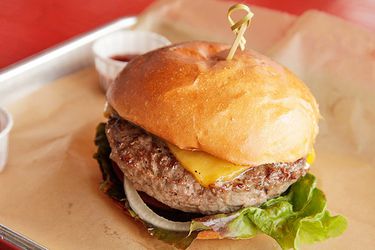 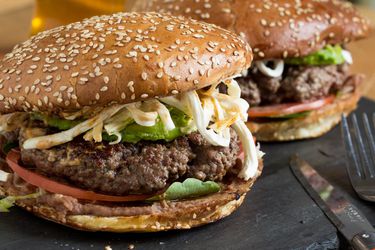