Yesterday, we gave you our price-no-object recommendations for New Orleans eats. But one of the many great things about this city—you don't have to spend much to eat well. If you're looking to keep your vacation costs down, here's a guide to serious eats on the cheap: oysters, drinks, and all.

About as old-timey as it gets, Camellia Grill is a charming Uptown diner where, if you're not chatting with the white-jacketed counter guys, you're doing yourself a disservice. Waiters, short-order cooks, and entertainers all, they'll whoop and holler and welcome you to Camellia as they turn out crispy-edged pecan waffles or enormous, fluffy omelets (the eggs whipped up in a milkshake frother) in mere minutes. Not enough charm for you? You can take the streetcar there.

Walking into the century-old Angelo Brocato is like walking into any gelateria in any city's Little Italy, with one critical difference: the gelato inside is fantastic. Classics like pistachio and creamy fior di latte are silky and intensely flavored and not too sweet; you won't go wrong with filled-to-order cannoli or a hot cappuccino, either.

Want to experience the charcuterie, the piggy deliciousness, or the cocktails of Donald Link's Cochon without shelling out for dinner? Stop by Cochon Butcher in the same building. Order at the counter, then sit inside or out to scarf down this crazy bacon melt (made with buckboard bacon and collard greens) or the Cochon muffuletta, all the meats house-made—we'll go on record saying it's the best muffuletta in town. (And yes, we've eaten it next to Central Grocery's.)

Sure, you can get an Abita Amber anywhere—and there's no reason you shouldn't. (Would that the local favorite beer in every American city was this drinkable.) But if you want to branch out a little, head to beer paradise d.b.a. for 20-odd brews on tap (including some interesting local picks), a lively (but not Bourbon Street lively) crowd, and live music.

Parasol's isn't just the kind of bar where crowds gather to watch and cheer on the Saints on game day—it's the kind of bar where crowds gather to cheer for Saints game reruns. (True story.) So as long as you're not put off by bar-thumping and occasional cries of Who dat?, head to Parasol's for a few Abitas and the best roast beef po' boy I ate in the city—not doused in gravy, but cooked so long it dissolves in its own juices, almost like a pulled pork sandwich. (Yes, I preferred it to Parkway's.) The fried oyster po' boy is just as good.

Down in the French Quarter, Cafe du Monde gets the beignet tourists—and there are any number of reasons to head down there, from the huge enclosed patio to the unparalleled people-watching. But bite for bite, we actually prefer the crispy little fritters from Morning Call Coffee Stand in suburban Metairie. And with old wooden stools and white-hatted waitresses, the place isn't lacking in atmosphere, either. Particularly if you're already headed to our next stop...

All the way up on Lake Pontchartrain, R&O's may look every bit the divey seafood shack, but it's a damn good divey seafood shack. We won't point you toward the pizza that makes up a big chunk of the menu, but you can't go wrong with boiled seafood, heaps of fried shellfish, classic gumbo, or the po' boys—and while the fried shrimp are great, the R&O Special, gravy-laden roast beef piled with ham, is one of the best po' boys we had in New Orleans.

Want the crawfish without the restaurant? Stop by any roadside seafood shack (pictured above, Schaefer's Seafood in Metairie) and grab already spiced and boiled shellfish on the cheap. Ready to eat, they're a great picnic lunch (or snack eaten off the hood of your car). Warning: it gets messy.

There's a snowball shop (think dressed-up snow cones) just about everywhere you look in New Orleans, but there's something particularly charming about Hansen's Sno-Bliz on Tchoupitoulas—maybe that it's still a group of Hansens shaving the ice, on a machine that Ernest Hansen perfected in 1939. Our favorite flavors? The satsuma (an orange-like citrus) or anything topped with condensed milk.

Just like yesterday, we'd love to hear your recommendations for cheap New Orleans eats. (This thread could go on for awhile.) 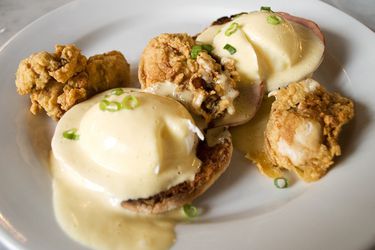 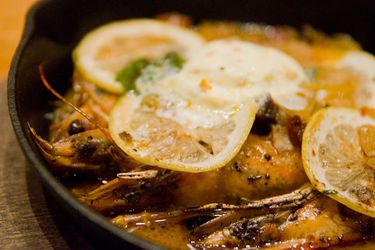